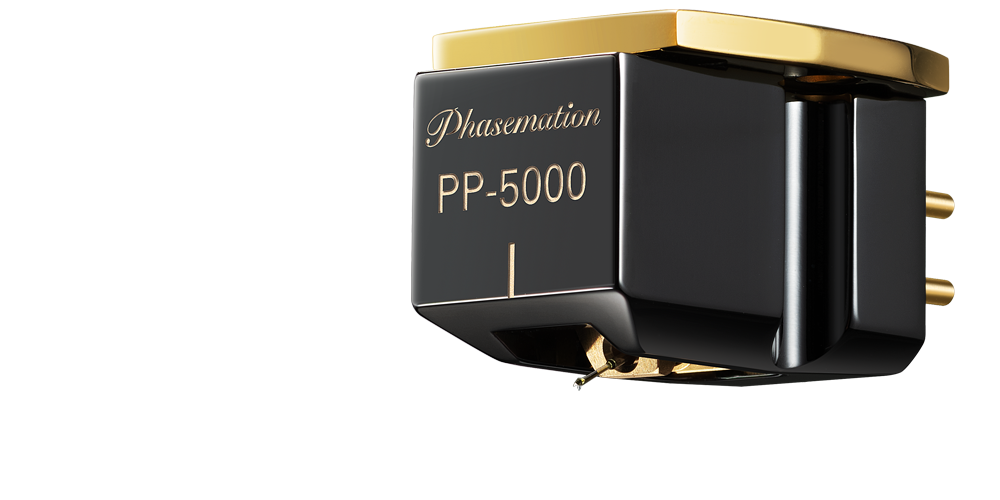 Phasemation started with the P-1 cartridge in 2002, and this year marks the 20th anniversary of the brand's founding. To commemorate this anniversary, we have created a new flagship cartridge, the PP-5000, which is a new milestone in the field of cartridges and said to be the origin of the brand.
Based on the knowledge gained through continuous research on cartridges, the PP-5000 has a diamond cantilever to achieve even greater spatial expression, sound image localization, and bass sound playing which is suitable for a flagship cartridge.

For the cantilever, we for the first time adopted a diamond cantilever. The amount of information has been expanded by enhancing the propagation speed.

Improved the trackability by reviewing the vibration system

The stylus tip is made of natural diamond, which is becoming rare to be sold it the market. The mounting angle precision of the stylus tip has been reduced from ±5 deg to ±3 deg for a more accurate tracing capability.

By adding a new polishing process to the permendur yoke of magnetic material to make the magnetic field more uniform, the reproduction of minute signals has been improved and achieved a more spatial expression.

Body structure of a new generation

The stainless-steel base is newly coated with TiN (titanium nitride) to achieve a beautiful golden color as well as corrosion resistance and sufficient hardness. The duralumin cover is coated with DLC, a coating that has earned a reputation from the past. In addition, the new shape of the body controls unwanted vibrations and is suitable for flagship models and has a more direct sound quality.