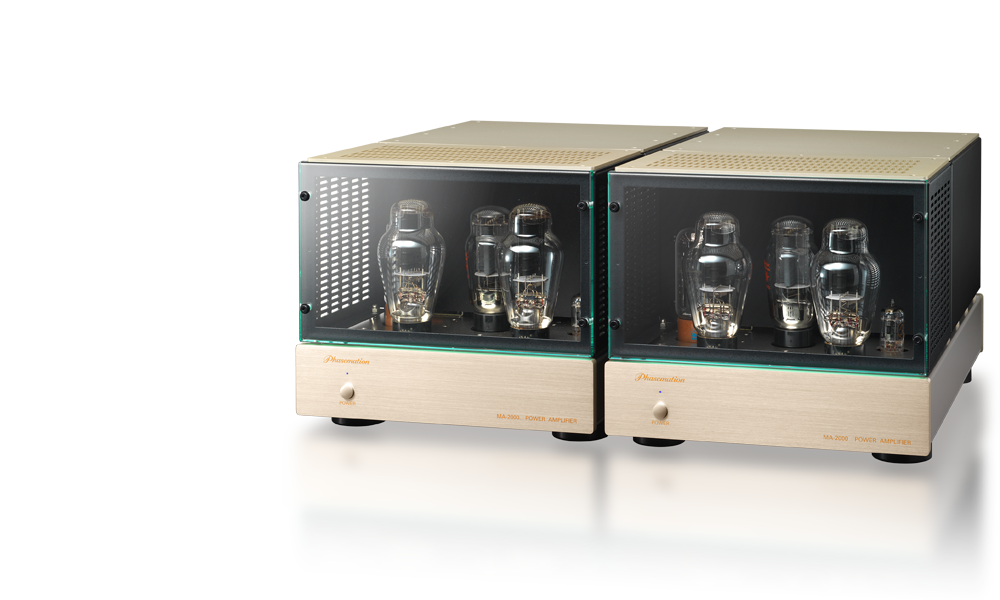 300B Parallel Single-ended Tube Monaural Power Amplifier which can educe the music reality and even the artist's passion
In the world of audio amplifiers, the wide kinds of semiconductor amplifiers, tube amplifiers, etc. are released. Therefore, the respective audio features can be enjoyed as a hobby. Especially tube power amplifiers adopting a tube called 'fine tube' such as 2A3 or 300B have well-established sound quality that cannot be expressed by semiconductor amplifiers and they are accepted consistently even in the modern era. "We would like to taste the best sound produced by a 300B amplifier composed by a parallel single-ended circuit adopting 300B which is the best tube among them and a circuit strongly driven by a transformer-coupled circuit adopting 2A3." In 2016, we have developed the monaural power amplifier, MA-2000, to respond to the user's thoughts.

In order to compose the single pure class-A circuit so that the innate goodness of 300B is expressed with the simplest operation, two fixed bias power supplies are allocated individually for the ended-tube of PSVANE WE300B and therefore the setup of the optimum operating point and stable operation are secured. Consequently, this strong power greater than 25W outputted by a parallel operation can be supplied for driving a speaker. By adding the power supply system having a timer control (for 1 minute) at the time of turning the power supply on, the operation with further high reliability is achieved.

We utilize 2A3 which is well-established even as an ended tube for a transformer–coupled circuit to drive the ended tube 300B, set 2A3 to the optimum operating point, and secure the DC stability by supplying the individual fixed bias to 300B parallel circuits. Therefore, the speaker is driven with unshakable stability.

We compose the non-feedback amplifier by adopting triode tubes, 12AX7SRPP+2A3+300B, in all stages. Therefore, the ability for reproducing dynamic and very expressive music is provided only possible from the non-feedback circuit.

Because the power supplies from the independent power choke transformer are individually supplied for the driver stage (2A3) and power stage (300B parallel single-ended), the mutual interference between the input signal amplifier circuit and the speaker drive circuit is purged. Therefore, signals of various levels from infinitesimal signals to high power signals are amplified clearly.

Thoroughgoing design for decreasing the noise

We have adopted the thoroughgoing design for decreasing the noise as follows:
-Rectifier tube 5R4G which does not generate a switching noise in principle against a high voltage
power supply
-Rectifier circuits composing of choke transformers
-DC ignition for heaters driven by complete DC power supplies for all tubes.

The color of the timer indicator is red at the time of standby and changes to blue after 1 minute as a starting time. In addition, the impressive front glass with placing the two-color LED indicator on the front panel is designed as a stately appearance. 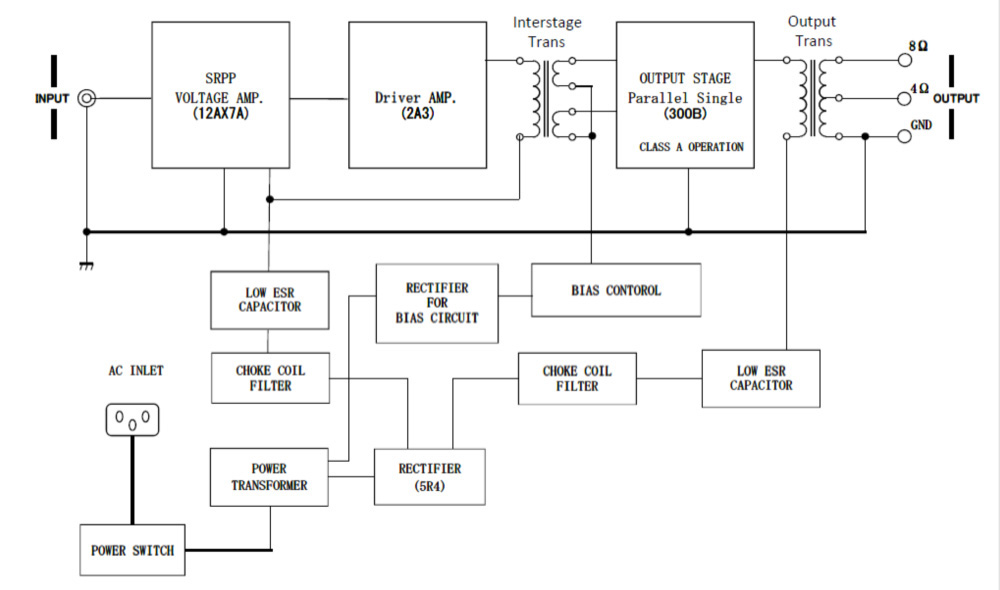